Take Action Join The Pack What We Do 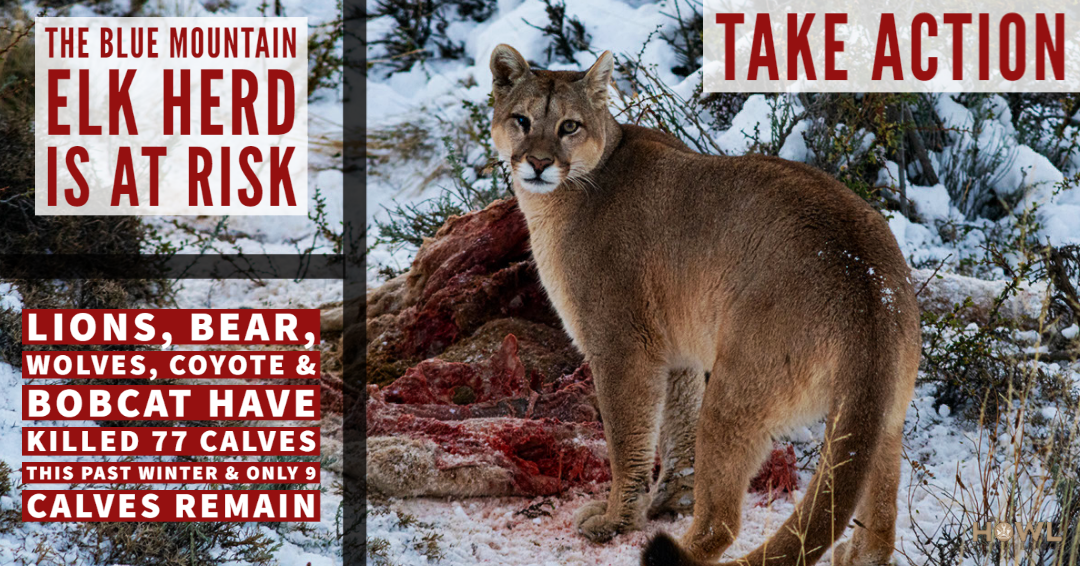 WDFW is taking public comment over the next five weeks on a proposal to allow hunters to take a second mountain lion “in the areas where monitoring has shown a high level of cougar predation on elk calves in the Blue Mountain Elk herd.”

GPS monitoring of young elk that began last spring show that just nine of 125 made it through this past never-ending winter, with 77 of their deaths attributed to predation, mostly by mountain lions.

The capture-collar effort will be repeated this spring, but it has also sparked calls from hunters and local officials to do something about the problem now.

That’s also the range of the Blue Mountains elk herd, which is classified as “at risk” under a recent population assessment because it has dropped so far below its management objective of 5,500 animals.

The decline began following the killer winter of 2016-17, but despite reduced permits for antlerless cows – the reproductive engine of the herd – numbers are not bouncing back as would be expected, and WDFW is pinning that on cougars, which accounted for 54 of the 77 dead calves. Bears, wolves, coyotes and even bobcats took down the rest.

This year’s aerial survey found 3,600 elk on the range and only 17 calves per 100 cows, well below levels needed to stabilize let alone rebuild this hard-bitten herd.

“This proposed rule is in response to a recent WDFW monitoring effort that showed higher than expected calf mortality attributed to cougar predation in the Blue Mountains,” said Anis Aoude, WDFW Game Division manager, in a press release. “We are seeking your feedback on this proposed rule change.”

The agency “anticipates a corresponding increase in juvenile elk survival” if the increase is adopted and hunters harvest more cougars, but notes that it does not actually change the season structure in the Blues, where cats can be pursued during the September 1-December 31 general hunt and then from January 1-April 30 under a harvest management guideline that sets out a range of animals that can be taken.

In Population Management Unit 9, the northeastern Blue Mountains and foothills, that number is seven to nine cougars; in PMU 10, the range’s western side, that’s six or seven; and in PMU 11, its rugged southeastern face, it’s five or six. The ranges correspond to 12 to 16 percent of the cougar population.

Only one of the three PMUs – 10 – met the quota before the end of this year’s winter season.

Essentially, the proposal would allow the best cougar hunters to take a second one. A second transport tag would be required. (this is important to understand.  The real issue is there are no effective or efficient methods of take available, such as hunting with hounds, and the mountain lion quota as it stands today is not high enough to be effective for proper balance & management of Washington's wildlife).

The Fish and Wildlife Commission will also hold a public hearing on the proposal at its June 23-25 meeting, and is scheduled to make a final decision July 15.

What the commission does will be interesting.

The citizen panel that oversees WDFW policy has been increasingly loath to address predation, voting twice in the last six months to kill the limited-entry spring black bear hunt for 2022, which with its 158 tags in the Blues could have at least helped disrupt bruin predation on elk neonates during May’s birth pulse.

Last December a former and current member also suggested controversially the solution would be just to lower the elk herd objective and reduce hunting opportunities more.

By taking action below you'll be sending one of over 30 pre-drafted emails/comments to WDFW surrounding this subject.  Of course you can edit these emails to reflect if you are a resident that would be affected by this bill, or your own personal experience, etc...  Please be respectful.