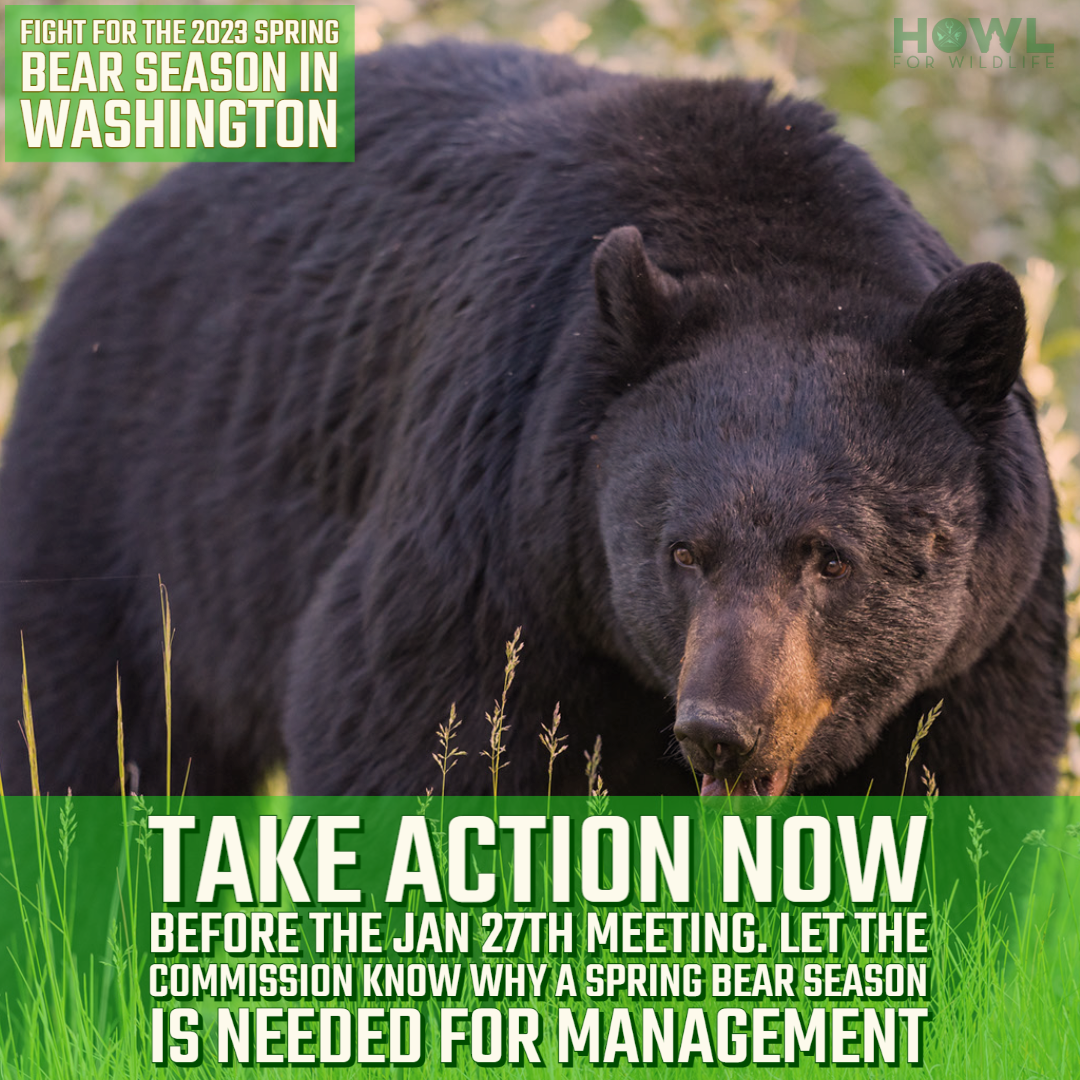 It’s time for the Washington Fish and Wildlife Commission to live up to its word and reinstate a spring black bear management hunt.

The future of spring bear hunting hangs in the balance in Washington once again.

In response to a November vote to not open a recreational spring black bear hunt, a petition to immediately begin rule-making for a 2023 spring black bear management hunt has been submitted to the state’s fish and game commission and will be considered at its January 27 meeting.

We need as many HOWLs from our pack as possible in support of the petition and spring bear hunting in Washington.

In November 2021 the Washington Fish and Wildlife Commission voted 5-4 to adopt a policy that closed spring black bear hunting after 48 years in existence, effectively ending the hunt unless the commission votes to reverse its decision in the future.

The new policy stated the commission doesn’t support a recreational hunt of black bears in the spring when black bear cubs could be orphaned. An unfounded, emotional justification.

In November 2022, the Commission again voted down a proposal to have a limited permit, recreational spring bear hunt in areas where WDFW has observed ongoing human-bear conflicts, low fall harvest results, commercial timber damage, or concerns for ungulate species recruitment.

In almost the same breath, the Commission voiced support for the WDFW to propose management hunts that would use recreational licensed hunters when needed to address the listed management objectives.

The semantics of recreational versus management in the Commission's decision-making would be laughable if it wasn’t so unbelievable.

Since the Commission (or at least some) has gone on record saying that they would be in favor of spring management hunts that would help manage population numbers, and reduce human-bear conflicts, commercial timber damage, and ungulate predation — it’s time to hold their feet to the fire and make them live up to their word.

SIGN UP TO SPEAK TO THE COMMISSION FRI JAN 27th HERE

You'll get the links to sign up and talking points

By taking action below you'll be reaching 10 decision makers (all WDFW commissioners, WDFW big game manager and the general contact for the commission).  We have 75 emails and subject lines pre-drafted that will be selected for you at random however you can edit, add or write your own from scratch.  Please add your own input as well and please be respectful.